I have been struggling to write this review. I have a draft that keeps growing, with more quotes, more of my analysis, more words -- but as I write more, I worry that I am getting further away from Stefan Zweig, further away from this beautiful, sad, angry, insightful, anguished text.

So am I scrapping all those words, and starting over.

Stefan Zweig (1881-1942) wrote The World of Yesterday in desperate times. The unconventional memoir is a cri de coeur from Zweig, who stood for everything Hitler most hated and feared. Born to a wealthy Jewish family, well-educated, speaker of many languages, famous both in his native Austria and throughout the West from the many translations of his novels, stories, and other writings, Zweig believed passionately in the vital need for an international community of artists. He had escaped from his home in Austria, driven out by the oppression and hatred of the Nazis. Shaken, exhausted, anguished, he wrote the book not to discuss his two marriages, or to focus on his personal relationships and feelings. Instead, Zweig wrote a memoir of a place, Austria, and a time gone by. In every word, he is grieving for his lost homeland, and even more for an unrealized ideal.

Written from the perspective of a man who grew up in the waning days of the Austro-Hungarian Empire, who lost his innocence in World War I, and believed for a brief time that Europeans had learned their lesson and had put an end to future wars, The World of Yesterday is a lament, a work honoring a dead and buried past, and a suicide note. One day after his second wife mailed the manuscript to Zweig's publisher, the two took poison and died in each other's arms in Brazil, too exhausted to wait for better days that they feared wold never come.

Stefan Zweig and his brother Alfred in Vienna, c. 1900

Stefan Zweig was once one of the best known writers in the German language. His works were widely translated and popular across Europe. Zweig was prolific, engaged in the arts every way he could be. He wrote not only short stories and novels, but also works of non-fiction (including immense, carefully researched biographies of Balzac and Mary Stuart), plays, and libretti. He also worked as a translator, which may have helped him to foster relationships with writers from across Europe. His travels provided him with rich experiences in his younger years, and enabled hm to forge lasting friendships with many writers and artists, In the end, though, he loved having a home in Austria. He was brought up in the rich cultural life of Vienna before World War. As an adolescent he was caught up in a flurry of adoration for Hoffmansthal, and he later forged a friendship with Rilke. He watched Rodin work in his studio, and he admired and respected Freud. His early writings were published by Theodor Herzl, among others.

Zweig was a lifelong pacifist, who was apolitical at heart. His orientation to the world around him was influenced by his commitment to the ideal of Europe as a cultural community, where artists from many countries would support and draw inspiration from each other, create a shared international culture, and guard diligently against intolerance and war. He valued creativity and freedom of expression. He was notoriously hard on himself and modest, despite his eventual fame. He spent his money building up a valuable library and collecting autographs and manuscripts that captured moments of creativity from Europe's greatest artists. (This library was later destroyed by the Nazis.) He traveled, he wrote, he corresponded with friends, he was inspired and driven to do his best by their example.

Zweig was shaken to his core by the onset of World War I, which broke apart his safe, insulated world. He managed to continue to correspond with some friends in France and Italy, but he was worried about the censors. A trip to Switzerland to meet with other artists committed to pacifism was complicated by the ubiquity of government spies, alert to the possibility of treason. After the war was over, Zweig worried about losing old friendships until he was greeted affectionately by old friends during a trip to Italy. Zweig describes his friendships with writers such as Romain Rolland and Rilke. He opens a window into his world, full of books, ideas, music, ideals, friends, debates, art of all kinds.

Zweig also provides chilling descriptions of the rise of Hitler and the Nazis. Zweig's memoir is particularly insightful in conveying the experiences of a renowned writer, at the top of his popularity, when he became a focus for the brutal hatred of the Nazis. Any readers concerned about the consequences of censorship for a free society should read Zweig's account of this period. 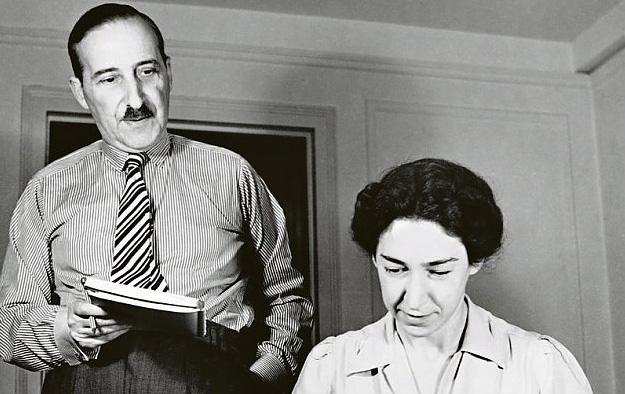 Stefan Zweig and his second wife, Lotte Altmann (his secretary) -- married 1939, committed suicide together in Brazil in 1942

The World of Yesterday is a devastating book, but it is also illuminating. Zweig's perspective, looking back to his earlier years in the last decades of peace in Europe, transported me back to a vibrant Vienna, where culture was valued above all else. He also warns about the ways in which complacency helped to lead to World War I, as Europeans were living their lives with blind trust in their governments. His insights on the cultural conditions that lead to the rise to totalitarianism extend to his discussion of the rise of Hitler. Throughout, Zweig provides details and anecdotes from his experiences to add color to his more analytical passages. He writes with passion, warmth, modesty, anger, and anguish. Today, we live in a world where, in spite of globalization, strife, hatred, greed, and ignorance are barriers to the kind of internationalism that Zweig dreamed of. When faced with economic downturns, some nations look to cuts in funding for the arts as a partial solution. Parents and special interest groups sometimes call for the censorship of books, music, films, and art that pose threats to their professed values. I fear that Zweig would not be surprised by the lasting relevance of The World of Yesterday in the early 21st century. Reading it is one way to continue his quest, to turn back hatred and intolerance, one line at a time.

I want to give Zweig the last word by quoting a passage in which he is reflecting on the day when Germany invaded Poland, when Zweig was living in exile in England:

"For was a more absurd situation imaginable than for a man in a strange land to be compulsorily aligned – solely on the ground of a faded birth certificate – with a Germany that had long ago expelled him because his race and ideas branded him as anti-German and to which, as an Austrian, he had never belonged. By a stroke of a pen the meaning of a whole life had been transformed into a paradox; I wrote, I still thought in the German language, but my every thought and wish belonged to the countries which stood in arms for the freedom of the world. Every other loyalty, all that was past and gone, was torn and destroyed and I knew that after this war everything would have to take a fresh start. For my most cherished aim to which I had devoted all the power of my conviction for forty years, the peaceful union of Europe, had been defiled. What I had feared more than my own death, the war of all against all, now had become unleashed for the second time. And one who had toiled heart and soul all his life for human and spiritual unity found himself, in this hour which like no other demanded inviolable unity, thanks to this precipitate singling out, superfluous and alone as never before in his life.... I knew what war meant, and as I looked at the well-filled, tidy shops I had an abrupt vision of those of 1918, cleared-out and empty, seemingly staring at one with wide-open eyes. As in a waking dream I saw the long queues of careworn women before the food shops, the mothers in mourning, the wounded, the cripples, the whole nightmare of another day returned spectrally in the shining noonday light. I recalled our old soldiers, weary and in rags, how they had come back from the battlefield, – my beating heart felt the whole past war in the one that was beginning today and which still hid its terror from our eyes. Again I was aware that the past was done for, work achieved was in ruins, Europe, our home, to which we had dedicated ourselves had suffered a destruction that would extend far beyond our life. Something new, a new world began, but how many hells, how many purgatories had to be crossed before it could be reached!"